*UPDATE: As of 3/24/20, the Rescue Squad has rescheduled their annual bass tournament. The tournament will be held Saturday, June 27, 2020.

The Scottsboro Jackson County Rescue Squad (SJCRS) will be holding their 9th annual $10K Bass Tournament at Goose Pond Colony on June 27, 2020. This is the only fundraising event the SJCRS holds all year, and it’s the only tournament on a local scale with a payout that large.

The SJCRS is a non-profit 501 (c)(3) organization, and it has the daunting task of servicing all of Jackson County, and in most cases, the surrounding counties on a shoestring budget of $35,000 per year. They work seamlessly with other agencies, local and in other counties. Just this year, this area has been hit hard with one disaster or tragedy after another. SJCRS has been there for all of them.

Jackson County alone has over 1,127 square miles, and the majority of that area is sparsely populated and dense with forest. Captain Eddie Tigue stated an annual budget of $50,000 is much more feasible but still barely enough to scrape by.

The SJCRS is responsible for the fuel to, during and from a site. If they need equipment of any kind, such as an underwater camera, an ATV capable of getting them to and from these remote locations, safety gear, lights, batteries, etc., it all comes out of their budget. Currently there are 36 members in the SJCRS. Each one of them undergoes training, including cave rescue. Tigue stated six members are signed up for the next cave rescue class coming next month.

A popular spot for the SJCRS to get called out to is the Walls of Jericho, but you can find the SJCRS anywhere other agencies don’t want to, or can’t go. They respond to lost or missing people, Alzheimer’s cases, hunting accidents, caving accidents, drowning or fishing accidents, body retrievals, injuries in the middle of nowhere, out for days at a time in some cases, countless other situations and scenarios, and they do it all for no pay.

As if that weren’t enough, the squad is also setting up a community shelter in their new building. Tigue stated all they lack is to finish the kitchen, install a shower in the women’s restroom, put in a men’s and women’s handicapped restroom and acquire some cots for beds. Depending on funds, Tigue hopes to have it completed by the end of the year.
Captain Tigue, who grew up in the squad and has been an official member since he was 18 years old, stated the SJCRS becomes a part of you, and you become a part of a family. He stated if you decide to make a tax-deductible donation to their organization, or if you decide to compete in the tournament, those funds stay local and help them take care of the fine people of Jackson County. Check out their page on Facebook under Scottsboro Jackson County Rescue Squad and fill out an entry for the tournament today. 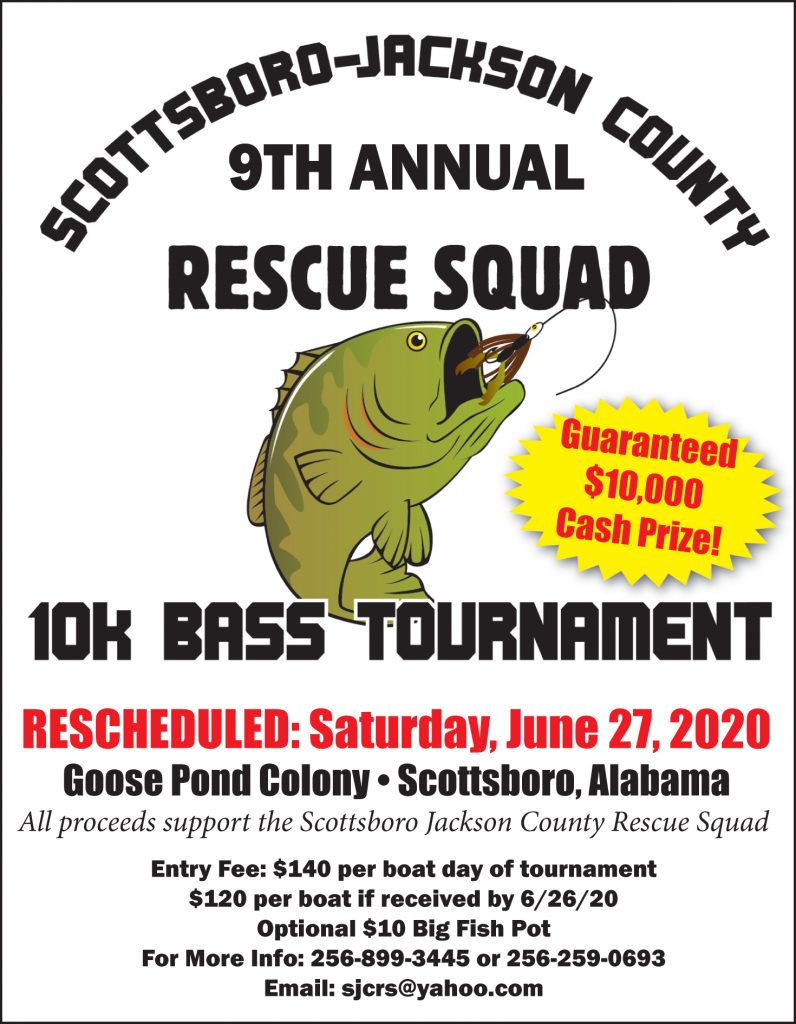 This entry was posted on Thursday, March 5th, 2020 at 10:18 AM and is filed under Clarion Top News. You can follow any responses to this entry through the RSS 2.0 feed. Both comments and pings are currently closed.